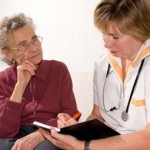 Before I continue with this article, you should know I've recently compiled a list of science-backed ways to get rid of candida yeast infections. You can download my free Candida Report here if you haven't yet.
Here are the four key antifungal pharmaceutical drugs: