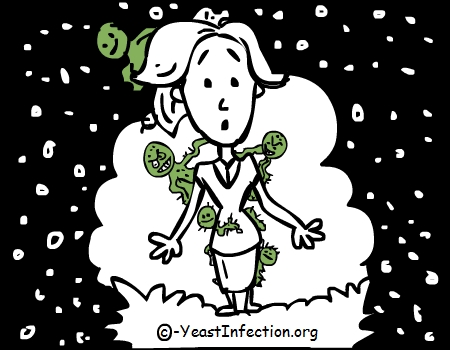 What many people fail to realize is that yeasts and bacteria reside all over the skin. Often, although we have a general aversion to bacteria these days, these organisms act in a protective capacity. The skin, although it can make a pretty outer shell, is actually the largest organ of the body and is constantly reacting not only to what is happening to us externally but also internally.

Before I continue with this article, you should know I've recently compiled a list of science-backed ways to get rid of candida yeast infections. You can download my free Candida Report here if you haven't yet.
As an example of how internal problems can affect the skin we can take the condition of shingles into consideration. Although it presents on the surface of the skin as a rash or blisters or sometimes both, this rash is due to a virus traveling up from nerves deep inside the body and emerging on the surface. In some cases the bacteria and yeasts which reside on the skin will be able to overwhelm this pathogen, but, and particularly when immune responses are diminished, then it cannot and illness occurs.

When it comes to yeasts similar things can happen in that an internal problem manifests in external symptoms – yet rarely are the internal problems investigated. Most people are aware that if they have problems on the skin they will be provided with a topical treatment such as a cream, to apply to the affected area only. Often the problem is further complicated because there are areas on the skin which are conducive to yeast infections. In women the most commonly recognized is that of the vagina which is moist, dark, airless and warm. Yet there are other places on the body where yeast infections can occur and which make it more difficult to treat. Anywhere on the body where there are creases or folds of flesh and particularly those which are covered by clothes rather than exposed to the air, are vulnerable. Under arms, behind knees in the crooks of elbows and on the scalp are places which are often affected. However women can also often be affected in the area just underneath the breasts where they touch the skin. This area is also, like the other commonly affected regions, warm, dark and moist. A problem which can also aggravate yeast infection in this area is that the skin can also be irritated by tight bras which, more often than not, are nylon or synthetic based in the support banding.

Yet diagnosing skin yeast infections can be more than a little problematic. Firstly many people present at my surgery who have already achieved a diagnosis of another skin condition, such as eczema or even psoriasis. Yet often I find what they actually have is a skin condition caused by a yeast infection and one which would respond more effectively to natural treatments rather than contemporary drugs. However these problems can become even more complex when a patient does actually have another skin condition and then that problem is aggravated by contracting a yeast infection on top of it. Either way, if the patient is only receiving treatment for one of the complaints then, clearly, the problem is not going to go away.

One fact which can assist in clarifying the true nature of skin infections is where it is located. If it manifests on any of the areas of the body which are conducive to yeasts, then often a fungal infection is involved to a lesser or greater degree. Other strong indicators toward yeast infection can be if the skin is itchy and/or reddened and if you also have other symptoms indicative of a dysfunction of the gut microflora. These are usually in the context of digestive issues and can include constipation and or diarrhea, indigestion, bloating or excessive gas. Often you will also find that you may have developed a sensitivity not only to certain foods, but certain body lotions or facial moisturizers.

Causation of course is always worth establishing. Not only does it give you an idea why your current infection began but it also gives you an idea of what to avoid in future. Sometimes the cause is easy to identify and many people can trace it back to when they had a course of antibiotics, but others, such as long-term use of the contraceptive pill, might be suspected as being the cause but are often a little more tricky to avoid.

Yeasts have existed on the skin of man since the beginning of his time, but only now are we constantly exposing both our internal and external organisms to undue stressors. If you have a skin infection and are either having problems ridding yourself of it with contemporary treatments or you want to identify what it is prior to starting a treatment, then it is worthwhile doing a Google search for fungal skin conditions and having a look at some images to see if yours corresponds. There is little point in either continuing with a treatment or embarking on one, if the condition you have will not respond to a particular medication. If it is a fungal infection then often natural treatments are best to rid yourself of it in the long-term. You may not get the apparent ‘quick-fix’ promised by contemporary medicine but then you will not have to deal with side-effects or recurrent infections either.